Fixed 6 of the 10 target butts we had delivered in April last year. Started out to do 5 but we’re over achievers, so we thought we’d do 6.

Special thanks to Alan Buckley representing Telstra. Without him and his Telstra van we would not have had the tools we needed to do the job. Also thanks to Albert, Paul and Rhys who also provided some tools and Jonno, David, Wayne, Sharlene, Mitch (who had the flu so couldn’t train with the State team. Came to help his club instead), Mel, Grant, Sam, Peta, Jack and William for their time. Also thanks to club mascots Donnie, Yoshi and Mia for their moral support. 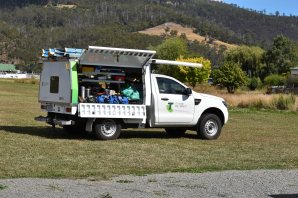